You are here: Home / Industry News / Mortgage Forecast for 2021

In 2020, mortgage rates started the year at historically low levels and went even lower as the pandemic took its toll on the economy. What can we expect as we move into 2021?

Mortgage Rate Forecast: Will it be the Same?

Most experts expect that mortgage rates will remain low through the end of 2020 and on into 2021. Even if a vaccine is successful and the pandemic recedes, the economic fallout will take some time to clear.

Major forecasters such as Fannie Mae, Freddie Mac and the Mortgage Bankers Association all expect that rates will continue to be low. In 2020 rates for a 30-year dipped under 3 percent for the first time ever, and they’re expected to stay near 3 percent well into next year.

The Fed has committed to keeping interest rates in the overall economy low at least through 2022. While Fed rates aren’t the same as mortgage rates, low Fed rates tend to drive all rates lower.

For home buyers, it’s a great time to act, and favorable mortgage rates will probably continue to be available for at least another year and maybe longer.

As always, predictions can be wrong, and there are a few things in the background that could possibly trend mortgage rates upward. For example, if the housing supply grows, and more people seek mortgages, the increased demand could push rates up. Also, continued government borrowing could create more general competition for loaned money, which puts upward pressure on rates. 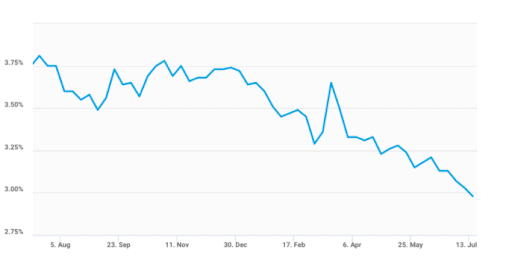 2020… The Year of Happy Homeowners

Reduced mortgage rates have been a boon not only for homebuyers but also for homeowners looking to refinance. As rates have plummeted, hitting record lows multiple times in 2020, many homeowners have exchanged their higher rates for lower ones.

The benefits of lower rates are lower monthly payments and less interest paid over the life of the mortgage. With the 2020 refinancing boon, people who already own homes have been able to get in on the bounty.

There is a small dark cloud on the horizon. On December 1, 2020, a 0.5% fee is scheduled to be imposed on most refinances. This fee has been met with resistance and has already been delayed once, but if it goes into effect it will bump up mortgage rates for people who are refinancing.

A lot of us have become so used to seeing mortgage rates in the fours and threes and even lower that we’ve forgotten how unusual this is. 30-year rates under 5 percent have been around since about 2011, which was near the low point of the housing market following the crash of 2008. Prior to that, rates were in the fives and sixes in the first decade of our century. They ran 6 to 9 percent in the 1990s and soared into double digits in the 1980s.

The point? Even if the experts are off and 2021 mortgage rates rise a bit, by historical standards they’ll still be low. Anyone who takes out or refinances a mortgage any time in 2020 or 2021 is likely to be happy with the rate for many years.

Looking to make a decision about a new mortgage or refinancing? Contact Mid America Mortgage to answer your questions and help you take advantage of today’s great mortgage rates.

"My family owns Tiger Ice Company. My experience with Ralph at Mid America started with Tiger Ice because we needed to expand our facility. When we went in to talk to Ralph at Mid America, he pretty much was straight up with us and told us we needed to go back to the drawing board. We came back with new numbers and a new plan, and we built the facility and everything was fine. Our dream of that would not have been possible at all without Mid America Mortgage Services, Inc and Ralph. They don’t tell you what you want to hear, they tell you the truth and that's what we weren't getting from other banks."

"I have had mortgages since 2004 in Columbia and have gone through a couple of banks, but over the last several years, the last couple of houses have been with Mid America Mortgage Services, Inc. Michelle has told us many times, 'I am not going to put you in a situation I am not comfortable with you being in, regardless of what it means for our company'.

Heidi always has a smile on her face and when you walk through the door, they recognize you and say “Hi”. I definitely recommend anyone who is in the home buying, purchasing, refinancing, upgrading business to go to Mid America Mortgage Services, Inc, ask for Michelle because they are going to be the best person you can work with."

"I knew Jeanie Byland for a long time. She made the process so easy. One of the things I probably appreciated the most was that she didn't want to spoil the excitement of closing on a new house by showing up on closing day finding out that we owe a lot more than we thought. They were upfront with that information right from the get-go, and that’s because it’s just like they say, ‘They wouldn’t put you in a loan that they would be comfortable taking themselves.’”

Michelle, I want to thank you for all of your efforts on the loan. I never knew how much information the needed! I appreciate your personal nature and ease of working together. Thank you for making this happen! :)

"One of the main things that I loved about Michelle was she was so organized. She would meet us at any location she needed to, and to be honest she had the absolute lowest interest rate. They were always very transparent with fees so there were no surprises. Michelle was always super easy and we would always run in talk to her even it was for a few minutes. The best thing was the process was very, very smooth."

Selling our home of 17 years and building a new home was a very emotional time for our family. We were ready for the next adventure in our lives but knew there were numerous steps involved. The search for a mortgage officer was simple, Michelle was our choice. Her guidance and knowledge made the process as easy as possible. When we had questions, she was always there to give us an answer and discuss our options. The employees of Mid America Mortgage Services, Inc like Michelle will keep us returning for our mortgage needs.

"When we were 18 and 19 years old no one wanted to help us get started. But Michelle took us under her wing 6 years ago next month. There is a lot of people out there that could of taken advantage of us many of times because we had no idea what was going on. For Michelle to stand beside us and walk us through, and not let us get into something that could get us in a lot of trouble means the world. We thank Michelle and we are extremely blessed to be able to work with her and her team. I have never even thought about talking to another lender and will always be loyal to Mid America Mortgage Services, Inc."

"My wife and I have moved around quite a bit with my job so we have been through the process before, but we have never had anybody help us as much as Michelle West Mid America Mortgage Services, Inc did. We needed a loan for a new construction home and they were able to help us out with all of our needs and make us feel comfortable with what we were doing moving forward. They did a good job of walking us through the paperwork to make sure that we were pre-approved for a certain amount."

"They really explained the process to us very well and made us feel very comfortable, specifically Jeanie Byland. I have never asked a question that I felt dumb about. They really wanted to educate us and have been fantastic. The interest rates changed one day and they called me to say, ‘Hey we might ought to look into refinancing your loan’. I really felt like they had our best interest at heart."

"I’m a very loyal customer at Mid America Mortgage Services, Inc. I have an addiction to building houses and designing them, and they are always right there with me every step of the way helping me get the best loan product and the best rates whenever I am ready to build. They make sure you don’t get a loan that you can’t afford. The whole process was very smooth. I would recommend Mid America Mortgage Services, Inc to anyone because they are always there to teach you, help you, and make it easy for you every step of the way."